A Beautiful New Edition of A Princess of Mars 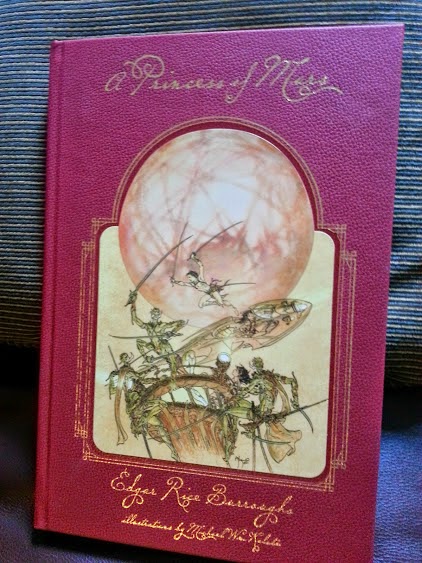 It's my understanding that Edgar Rice Burroughs' A Princess of Mars was a favorite of Professor M.A.R. Barker, and one of the early inspirations for Tekumel. IDW has just released a lovely oversized edition of the book, with wonderful illustrations by Michael Wm. Kaluta.

Here is the sky galleon from the endpapers: 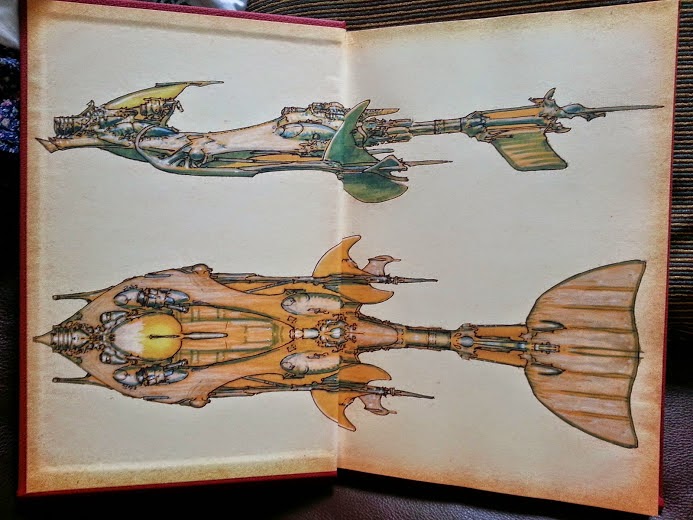 And here is a fight scene: 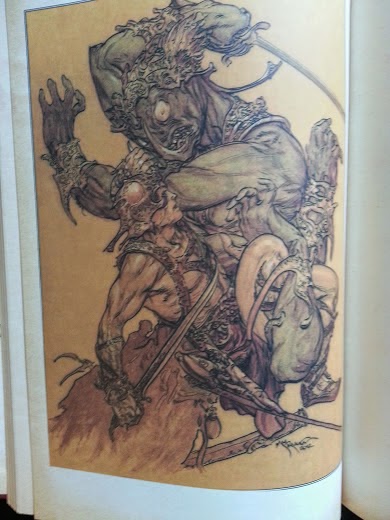 I was very impressed at how reasonably priced this book is at $30. Kaluta's art was a good choice for this book. His style is pretty, and very reminiscent of the colorful and willowy character designs on the covers of earlier generations' Barsoom books.


If you are a Barsoom fan, you will want to pick this up.
Posted by Tallgeese at 5:28 PM No comments:

Email ThisBlogThis!Share to TwitterShare to FacebookShare to Pinterest
Labels: Inspirations

Converting Empire of the Petal Throne's Magical Skills to Fate

Over the last two days, I have converted the EPT priest and magic user "skills" to Fate, using the Fate Freeport Companion as a guide. A few of the items on the skills list are indeed skills, such as the skills that confer the ability to knows 2 ancient languages or knows 2 modern languages, and the astrology skill. Those I am rendering as simple stunts. Here's an example of Astrology as a stunt:

Astrology: Take a +2 to WIS to Create an Advantage while observing the influence of the sun, the four planets, and Tekumel's two moons. This stunt provides insights into the influences and motivations surrounding a person or situation, uncovering a hidden Aspect.

So much for skills that are skills.

Here is an example of a skill that is a spell.

Telekinesis (Cost, Per Scene): Roll CHA to use your mind to move a solid object through air or water, but not through walls, etc. Weapons or missiles may not be moved this way, but the spell itself can be used to do harm. Target defends with DEX to get out of the way of the spell.

Some of the text in both these skills quotes the description in EPT. Neither is an exact replication of the EPT mechanics, however; Fate works differently as a system than EPT. For example, the description of Telekinesis in EPT says you can use it twice per day. We've described it for Fate as a Per Scene spell, meaning it can be used once per scene; the next level up is Per Session, meaning the spell could be used once per game session; the next level up from that is Per Scenario, meaning that the spell could be used once per scenario.

I'm thinking that people creating characters will be able to purchase three spells for one point of Refresh. Starting spells are selected at this cost from either/both of the priest and magic user skills lists. This is the cost for the first seven "skills" on each list. If you want some of the skills that are higher on the lists than the first seven on each list, the Refresh cost will be higher.

Hopefully we'll have the chance to test out some of these conversions today at CONvergence!  We may also do some conversions from the actual EPT spell list (as opposed to skill list) while we create characters.
Posted by Tallgeese at 11:14 AM 2 comments:

I spent the afternoon at CONvergence. When I left for the con, I felt sad leaving home. It had been a beautiful, cool morning, and the family had spent a pleasant morning on the couch.

It was parallel play.

The Anubian Ambassador was sitting in Carlos' lap, while he watched the World Cup and Wimbledon. For my part, I sat next to them reading about the mysteries of Lord Belkhanu and his faithful Cohort, Lord Qon. (And we might add that Lord Qon and the Ambassador have a bit in common).

But back to the Con we went.

It was a nice respite from people complaining online about inclusion in gaming. Imagine that! I was with 7,000 people for an entire afternoon, and nobody complained about that one paragraph in Basic D&D supposedly being "unnecessary"!

In the afternoon, Rachel Kronick of the Blade & Crown blog was part of a great panel on how to have a game and - a life - as you get older. Really, the panel was all about how to make sure you can persist in gaming as life gets more complex, which it invariably does as you age. I know that when my dad passed away, I stopped gaming for almost a year, and that's just one kind of complication that gamers face in later life.

I can't say I walked away from the panel with any magic bullets, other than a greater awareness of the importance of:
So that was good, as was the wonderful moderation of Beth Kinderman. Yes, a CONvergence panel in which the moderator actually moderated. Beth engaged the panelists and audience in a way that enriched the discussion. No huge digressions, no audience talking over the panelists!

I came home and had dinner with the family. Later the three of us went to see the fireworks. Before and after the fireworks, I set out to convert Empire of the Petal Throne's priest and magic user "skills" into spells for Fate of Tekumel.  I was surprised to discover (re-discover?) that some of the original EPT "skills" were quite powerful - especially items 8 and up on each list!

We'll be testing these conversions at the table tomorrow!

On Saturday, July 5, from 3-5 PM, we'll be doing a little Fate of Tekumel gaming at CONvergence in Minneapolis. The action is on the 22nd floor of the hotel, in the open gaming room. Feel free to stop by and game with us if you are either a Tekumel or Fate fan, or curious about either - or both.
Posted by Tallgeese at 10:51 AM No comments: