Warriors of the Red Planet 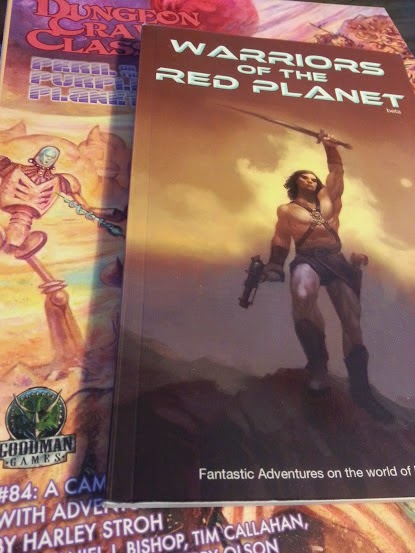 This weekend I'll be running a game of +trey causey's Strange Stars SF setting using my Fate Core rules for the setting.  Because of the potential for a surge of players looking for games to play, I have been asked to have a back-up game ready to goon Saturday. The back-up game is going to be Al Krombach's Warriors of the Red Planet, a very crisp 1st edition style planetary romance RPG. The book has beautiful art by Thomas Denmark, which really reinforces the tone of the game.

The game will be set on a version of Barsoon, a world that Professor Barker's Tsolyani PC parties periodically visited. It's an inspiring setting with a number of commonalities with Tekumel. This scenario may have some Tekumel crossover too, but the PCs will be natives of the Red Planet (Mars, not Kashi). They will be charged with investigating strange signals emerging from sand-lost ruins deep in the desert beyond their city-state.

Should be a fun game - and certainly the first old school game I have run since the late 70s.
Posted by Tallgeese at 7:40 AM