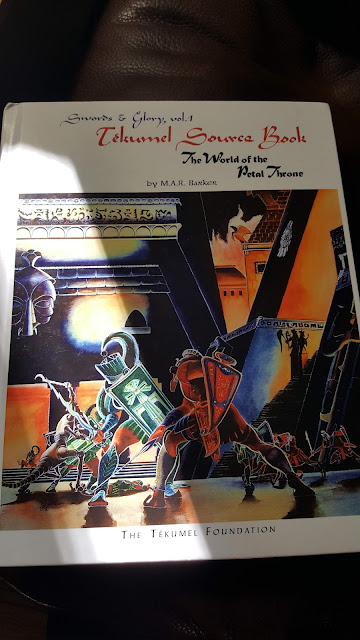 I just completed a read-through of Swords & Glory Volume 1: The Tékumel Sourcebook.  This reading spanned several years, from before my mom's passing through to breakfast this morning. I read intermittently, sometimes taking a break for several months. Quite a bit of the reading was done during travel - either by air, or as the dachshund-tending passenger on a road trip.

In fact, I was about to read the Sourcebook in its entirety when the binding on my Gamescience edition suddenly failed! We are very fortunate to have this book now available from DriveThru in both POD and PDF formats, with the wonderful, ever-so detailed index and glossary prepared by Krista Donnelly. They are quite remarkable, and improve the usability of the product quite significantly.

As I noted above, I had previously read parts of the Gamescience edition, as well as the Different Worlds editions cover-to-cover. But the last third or so of the Sourcebook was never published in the Different Worlds edition. This was the first time I had read the final Sourcebook sections on arms and armor, military units, assassins' weapons and the assassins' clans, and the arts and sciences. There is a LOT of great content packed into the last third of the Sourcebook; that's for sure!

A friend once said that Tékumel is the only world he needs for gaming, and there is a lot of truth to that.

So what's next? I really need to read Swords & Glory Vol. 2. But I need to wait until I have a sturdy POD edition of that in-hand. In the meantime, I am going to read this one cover to cover, as preparation for running Empire of the Petal Throne at Con of the North in February. I have played
EPT several times, and I have certainly used it as a reference for Fate of Tékumel, but this will be my first time running it! 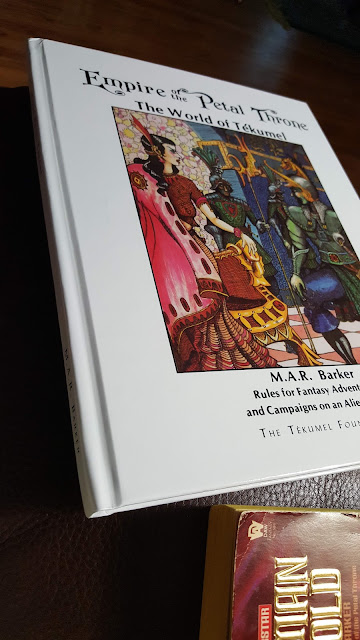