Tekumel Track at Con of the North 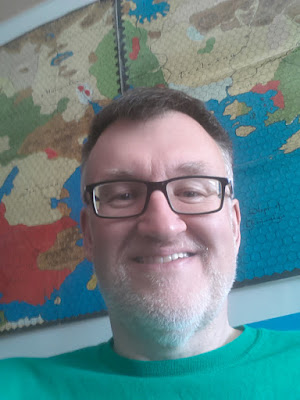 This past weekend was Con of the North, a gaming convention in the Twin Cities, Minnesota. For the third year in a row, Con of the North featured a superb Tekumel track. This year, I had an accident the day before the convention so I was at my home and off my feet for the first day. However, by Saturday I was back on my feet and enjoying two full days of Tekumel.

Saturday started with Bill Acheson's excellent miniatures adventure, "Panic in Pan Chaka." Bill travelled all the way from Baltimore to run this game, and he put together a fantastic table. There were miniatures gamers popping in throughout his four hour game just to see the spread. One was a gamer who had last played EPT some 30 years ago at Augsburg College.

Interestingly enough, I have only-ever played miniatures games in Tekumel settings. Multiple parties (assembled by an auction process) set out to discover why human villagers in the Chakas were disappearing. (And of course, each party was also motivated by the possibility of discovering loot.) My party consisted of a priest of Ksarul, an Ahoggya, and a Hlaka. This was a deadly wilderness crawl; the Chakas have lots of nasty wildlife.

Here's the set-up we encountered: 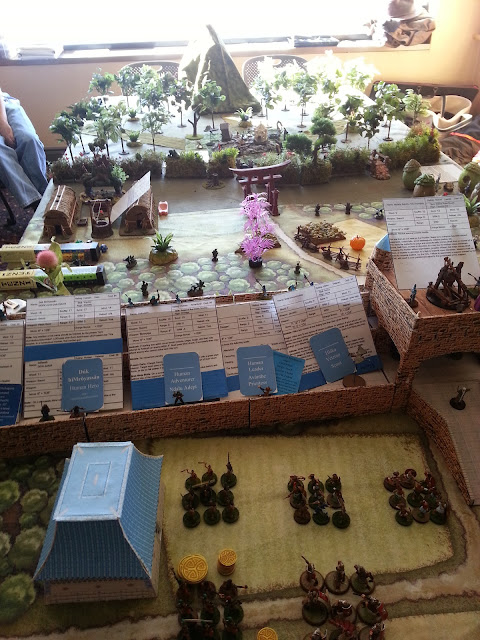 On Saturday afternoon, Don Kaiser, a veteran Tekumel GM, ran "A Royal Visit". The story featured a group of Golden Bough clan PCs dealing with the sudden arrival of Princess Ma'in in the city of Thraya. Our charge was to find out why Princess Ma'in was here, so that our clanmaster could turn her visit to our clan's advantage. Most of the session took place at an elite reception for the princess. Don's game was a great example of the kind of clan-based stories of intrigue that are possible with Tekumel. He also did a great job thinking through the implications of the princess' secret mission.

Saturday night Krista Donnelly, visiting from DC, ran a playtest of Felip Moral's Tekumel boardgame. She had a full table for the game, including a least three folks who were new to Tekumel. I missed my chance to play the game at this con, but I heard that the game went well and that the players had a lot of fun with it.

Our late Saturday night game was Brett Slocum's. He used the Warriors of the Red Planet RPG to run an adventure set in the Latter Times, a period of Tekumel's history when the level of techology was still relatively high, making it perfect for Barsoom-style swords & planet action. I had played a version of this scenario at U-Con in November and had a great time with it there. This time, we ran with an all-Fighter party!

Sunday morning, Don Kaiser ran "A Thrayan Intrigue", a follow-up scenario to "A Royal Visit". This one was an Underworld adventure that dealt with the immediate consequences of the princess' mission in the city. The PCs discovered a second Nexus Point in the Underworld adjacencies to the Golden Bough clanhouse. We went through the Nexus Point, and had a classic experience of the Twin Cities-style of Tekumel high adventure.

I wrapped things up on Sunday afternoon with "Black Ships in Jakalla Bay", a Fate of Tekumel RPG scenario set in the distant past of the Dragon Warriors and the Fisherman Kings! The scenario pitted the PCs against a huge naval armada besieging Jakalla.Seven players showed up for the game, which was a great way to end the Tekumel theme track and close out the convention!

I also used the scenario to playtest character generation for Fate of Tekumel RPG!  More to come on that! Look for a post in the near future on the Tekumel Foundation blog.

Posted by Tallgeese at 11:00 AM No comments: