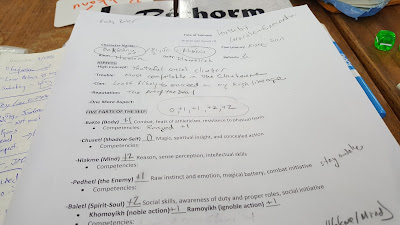 Yesterday was Dave Arneson Day at the Source, and since Dave was a Tekumel player and GM, I ran a playtest of some new chargen mechanics for Fate of Tekumel, and after that ran a three hour scenario set in the Forest of Gilraya. Both players were familiar with Tekumel (one is a veteran Tekumel GM, although this was the first chance we had ever had to play together), but new to Fate.

All three of us created players from the noble Rising Sun clan. We were on a hunting expedition in the Forest of Gilraya, and the party included:

The combats were tense and dramatic; Randy said they felt close to EPT, which is high praise.

The players shared some great feedback for the next cycle of chargen revisions, so I'll be incorporating their ideas over the next week!

Posted by Tallgeese at 11:50 AM No comments: