During my drive into work today, I was thinking of the various game systems that I have either played or GMed for Tekumel games. With GMs shown in parenthesis, systems played in the order in which I first played them include the following games:


This is a pretty comprehensive list of what I have played in the last 6 8 years or so (which is the entirety of my life experience playing and GMing (as opposed to reading) Tekumel. Not bad for a start. There is quite a range of systems too, from very narrativist (Barker's light d100, Fate, and entirely diceless), to light simulationist (such as T:EPT Lite and TFT) to simulationist (GURPS Lite, T:EPT) to light historical legacy systems such as EPT and Heroic Age: Tekumel.

There's no wrong road to gaming in Tekumel. Each of the above systems has its own strengths and weaknesses, but I can tell you that they all created the "real Tekumel experience". Since this is the 40th anniversary of EPT's publication, and therefore The Year of Tekumel, why not pick a system you like and give Tekumel a try?
Posted by Tallgeese at 10:31 AM 4 comments:

Con of the North's Tekumel Track


For the second year in a row, Brett Slocum organized a Tekumel track at Con of the North, one of the largest gaming conventions in the Upper Midwest. This year's track featured 40 hours of Tekumel programming! I was fortunate enough to be able to participate in 16 hours of that programming: two RPG scenarios, and a mini-Braunstein by Howard Hendrickson.

Don Kaiser, a Tekumel veteran who played with Professor Barker, ran the two RPG scenarios. The first was called Tekumel: Intercalary Intrigue, and took place (not surprisingly) during the intercalary days in the Tsolyani calendar. Set in the city of Thraya at a moment of numerous festivals, the PCs were tasked with investigating the murder of a family member. We played members of the very high status Golden Bough clan, and I have to say: life doesn't get much better than playing members of a clan inspired by the work of Sir James Frazier!

I played a Karakan-worshiping veteran of the Omnipotent Azure Legion. That intelligence background proved useful, as it allowed me to make use of player knowledge. The scenario dealt with some unorthodox interpretations of Tekumelani history (to say the least), and my recent reading of M.A.R. Barker's The Lords of Tsamra turned out to be particularly useful.

Don's second scenario, Tekumel: Tsuru'um Adventure featured the same characters. This adventure was my first time playing a Pe Choi. I was a member of the Golden Bough clan, a veteran of the legions, and a worshiper of Vimuhla. The party was charged with some treasure-seeking in the Underworld under the Golden Bough clan's extensive (and expansive) clanhouse. After a couple of encounters with Underworld creatures, we discovered a nexus point.

Of course, we went through it!

The second half of the scenario was spent exploring our destination: an ancient high tech installation of the Humanspace Empire, located on Tekumel's rust red moon of Kashi! Many discoveries and much looting occurred. A sorcerer also started to cast a spell on a metal floor, but at the last moment cam to their wits and averted catastrophe. (On Tekumel, casting a spell while in direct contact with metal (or who having metal on one's person) causes explosions.)

Thanks to Don for offering us a very enjoyable and immersive roleplaying experience!

Howard Hendrickson's wonderful Tumissa Nights mini-Braunstein pitted the players against each other in a palanquin race. I played a young Aridani woman who raced to earn the income to enter the seminary of the Temple of Dilinala. Here is my gracile palanquin: 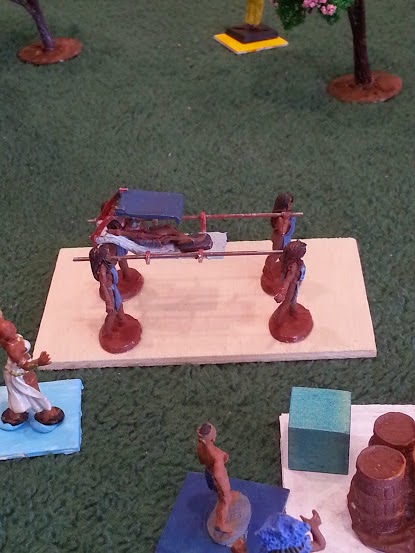 In addition to our palanquins, we also controlled a group of guards, and two runners (one of mine is pictured just below the blue cube). The job of runners was to rush to stores in the market place and see what goods were for sale. The goal of the race was to purchase as many quality items as possible, as well as "tokens" of esteem from various people we met while racing our palanquins around the city.

One of my guards had a memorable encounter with a towering female N'lyss gladiator who uses a ru'un (robot) arm as a club! At first my Aridani guard tried to earn a token using flattery and romance; that worked. Later, she tried combat.

That was a mistake. 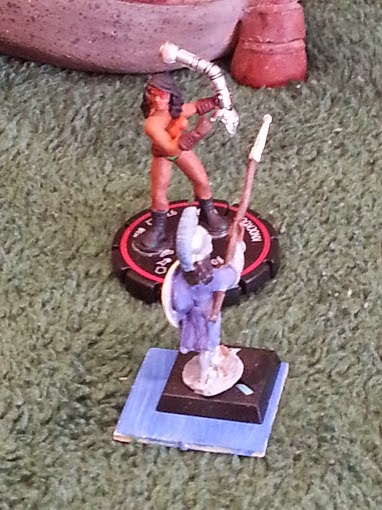 Congratulations to Howard for a wonderful miniatures gaming experience. It takes a lot of time and effort to transport all of the materials, props, and miniatures to make a Tsolyani city come alive on tabletop. He created a great game environment for us!

Posted by Tallgeese at 7:12 PM No comments: