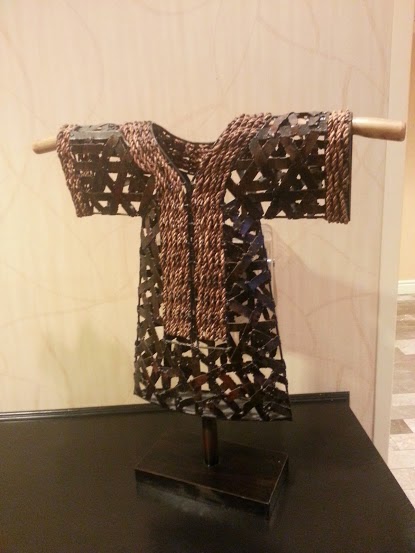 This armor was recently discovered in ancient ruins far to the north in Yan Kor. When brought back to the Empire, it was quickly if somewhat irreverently dubbed the "Vimuhla Baby Armor". Soon enough, representatives of the Temple of Vimuhla showed up to claim the suit of armor as an ancient Bednalljan relic of their temple. They claimed it was the armor of a princeling from Fasiltum, one who joined his Vriddi clanmates on a storied invasion of the cities to the north.

But several scholars have argued that there are much more likely origins for this suit of armor. The fact that the armor is charged with energies attuned to the Temples of Change does not necessarily mean that it was forged for the use of a follower of Lord Vimuhla. In fact, a scholar-priest of Sarku from the Ito clan claims (quite persuasively in the eyes of scholars from a number of different temples on both sides of the Stability-Change divide) that the use of copper strips suggests that this armor was commissioned by a noble follower of Lord Sarku - or even possibly the kit of a child-jajgi. (In which case it might still have a "living" claimant.)

The location in which the armor was discovered casts still further doubt on the identity of its intended wearer. A priest of Lord Thumis has dared to suggest - with all sincerity - that the armor is of approximately the right size for use by a Pygmy Folk adult. Since the ruins where the relic was discovered are also quite close to the remains of an underground city of the Pygmy Folk, this priest argues that the only real question is who took the armor from the Pygmy Folk - and why?
Posted by Tallgeese at 5:50 PM 2 comments:

I had a wonderful time running Fate of Tekumel and playing in other people's Tekumel games at U-Con last weekend. I came home on Monday, returned to work on Tuesday, and began to get sick on Wednesday. I became so sick that I took Thursday and most of Friday off.

So I guess "con crud" is real, and not just an excuse for delayed Kickstarters.

About the only thing I've been able to do in the last several days besides sleep, blow my nose, and cough is read about half of M.A.R. Barker's Lords of Tsamra.  It holds together a lot better than A Death of Kings, and is somewhat appropriate reading at the moment, as it deals with a plague.

Flying across Livyanu by aircar towards the independent city-state of Dlash, our heroes have landed in a remote mountain village where the locals speak "Dlashi, a tongue not related to the languages of the Five Empires, but - very distantly - to another ancient stock named Sunuz".

Interesting to say the least.
Posted by Tallgeese at 11:19 AM 4 comments:

This is a small taste of how a Thraya zone map might look for a game of Fate. Rachel Kronick and I started the design work this weekend, but it will take a while to render Thraya completely. As you can see, we're overlaying it on Professor Barker's original map of Thraya (see yesterday's post) as we build the city's aspects out district-by-district.

We'll see what additional details get added to the map as a result of our game at U-Con on Saturday!

Original Thraya map is the work of Professor Barker.
Posted by Tallgeese at 9:27 AM No comments: 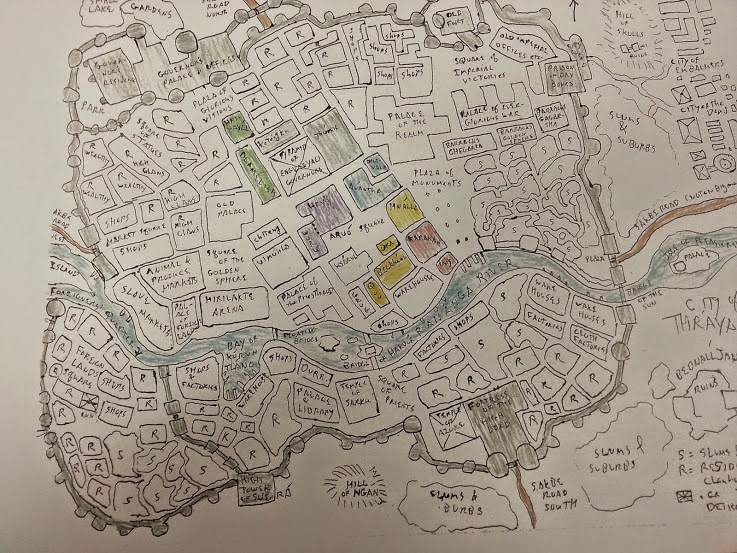 Fate of Tekumel products will be based in Thraya and the rural areas around that great city. This weekend, my friend Rachel Kronick, the author of the Blade & Crown RPG, started helping with the design of a Fate zone map for the city of Thraya, with city aspects for the different points of interest.

We are building the design based on Professor Barker's hand drawn original map of the city. At Rachel's suggestion, I used color pencils to fill in the Rananga River, noting the city walls, marking the ways to the nearby Sakbe roads, and calling out several of the most prominent temples in the city.

It was a good suggestion.

The photo above shows the map before lamination. I'll be bringing several to U-Con for my game there!

Oh, and the temple of Thumis is filled-in using grey, but rest assured: it is not a fortification!
Posted by Tallgeese at 9:46 PM 6 comments:

Email ThisBlogThis!Share to TwitterShare to FacebookShare to Pinterest
Labels: Fate of Tekumel, Thraya

We've been translating the spells from Swords & Glory over to Fate, using Fate Freeport Companion as a guide.  My eyes are blurry and my mind has begun to drift into the null, grey spaces beyond. Should I leave this "no-save vs. death" spell as-is for its conversion to Fate? Based on its description in S&G, I don't see non-magicians as getting anything resembling a save.

The Silver Halo of Soul-Stealing (Generic/Ritual, Cost, Instant, Per Day, Range: 3 Zones, Belkhanu/Hru'u): A glittering circlet of energy is sent spinning through the air to strike a target. The caster rolls WIS+2 vs. the target's highest skill. If the caster succeeds, the Spirit-Soul of the spell's target is borne away forever into the Unending Grey, leaving them a mindless automaton whose every action must be specifically commanded. Only a spell of Revivification or Re-embodiment can restore the target's Spirit-Soul. Any physical defense or cover is useless, and Disenchantment cannot help someone affected by this spell. But the spell can be deflected with a Warding spell, The Seal Upon the Powers, the Muniments of Excellence, and various temple spells that obstruct ritual magic. The spell affects all living beings, but not androids, automatons, undead, creatures produced by magic, and demons.

The above description contains direct quotations as well as paraphrasing of the original spell from Swords & Glory Vol. 2.
Posted by Tallgeese at 10:36 PM 2 comments:

It's called the Spell Corpus, even though Latin is not spoken on Tekumel. This week I converted 25 spells from Swords & Glory Vol 2 for use in Fate of Tekumel. The approach I took with the conversions was inspired by the Fate Freeport Companion, an implementation of Fate that enables the creation of discrete, specific magical spells. My focus in the last few days was on converting Tekumel's "universal" spells to Fate. Universal spells are the 25 most common spells that anyone in the Five Empires - regardless of temple - could be expected to learn.

My next step will be to convert Swords & Glory's "generic" spells: those specific spells shared by a group of temples with common thematic interests (e.g., both the temple of Vimuhla and the temple of Karakan have an interest on spells that wreak destruction on an enemy). The last step will be converting "temple" spells: those spells which are the proprietary secrets of one specific temple.

Now of course with all these great spell conversions, we needed to do another Fate of Tekumel playtest. So we did one on Thursday night, set in the city of Thraya. Each of the PCs chose to create a sorcerer-priest so we could test the magic system.

But who were the PCs? Well, Lord Máyu hiTunkesh of the Blue Shadow Clan is the Governor of Thraya. He's a Wuru worshiper in a city dedicated to Lord Belkhanu and the other Lords of Stability. His family has controlled the city for hundreds of years. And the clan's not getting any smaller: Lord Máyu has 510 children, 32 wives, and 251 concubines.

Soon the PCs were in the midst of a murder investigation involving poisons derived from Underworld creatures, and following the trail of fungal bread crumbs that led to the ritual festivities being carried out by followers of Hru'u at a wealthy clanhouse in the city. Everyone had some spells to cast, and the finale was both... terrifying and out-of-this-world!

Literally: Phantasms, Terrorization, and The Labyrinth of Elongated Shadows all cast simultaneously at the group of Hru'u worshipers summoning a demon.

Because of some of my custom game aids, the joke name for this session was "Laminations of the Flame Princess."

We'll be continuing to playtest these magic rules at U-Con next week!
Posted by Tallgeese at 8:30 AM No comments: