Juan Ochoa's beautiful image up above on the blog masthead is an action scene, and action scenes in games are always begging to be mapped - aren't they?

Fate handles mapping more abstractly than games that use miniatures. A scene is diagrammed in terms of zones. If you are in the same zone, you are in knife/fist range of opponents; if one zone away, swords and other melee weapons are very useful; at two or more zones, we are talking polearms and ranged weapons.

On to our scene.

If a picture tells a story, we can assume this is a jungle or swamp area somewhere in Tekumel. Our curious and alert Feshenga lurks in the foreground, with purplish Food of the Ssu adjacent to it. Behind both, there is a ruin. We also see a river. We can - and will for the sake of this exercise - readily imagine a party wading down the river (from upper center-left toward the lower center-right, walking toward the ruins). They may (hopefully) be a wary party, but the Feshenga is already aware of their approach, and the party has no idea that Food of the Ssu is nearby. 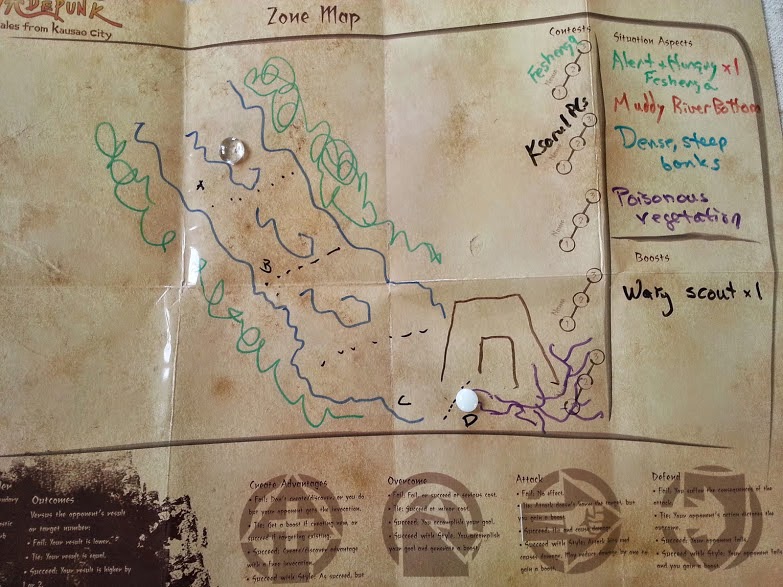 Let's assume the PC party are a patrol from the local Temple of Ksarul. They get dispatched down the river towards the ruins when the Temple gets a "signal" that someone or something has arrived in the Underworld near the ruins. They're experienced temple guards, with a scout in the lead. The scout is wary, and due to a decent Skill roll, will get a 1x boost due to being careful.

The river is passable, but the bottom is muddy. That's an aspect that either the GM or the players might Invoke/Compel. The river banks are dense with vegetation, which means that if the PCs try to get up onto the ground, they may face a slight barrier. The vegetation could also be put to good use as defensive cover.

Except that the Feshenga (the white bead) in Zone D has already seen the PCs coming; so the Feshenga gets a free Invoke on the aspect Alert & Hungry Feshenga. It will attack first. (Of course, if the PCs brought bait, they might be able to Compel this aspect, too.)

In Zone D, a second nasty surprise awaits the party. The poisonous purplish vegetation, the Food of the Ssu, is new growth. If the PCs survive their encounter with the Feshenga, they will still need to deal with all that deadly vegetation near the portal to the Underworld below.

Posted by Tallgeese at 2:10 PM

Email ThisBlogThis!Share to TwitterShare to FacebookShare to Pinterest
Labels: Scenarios