Clans for Characters Starting in Thráya 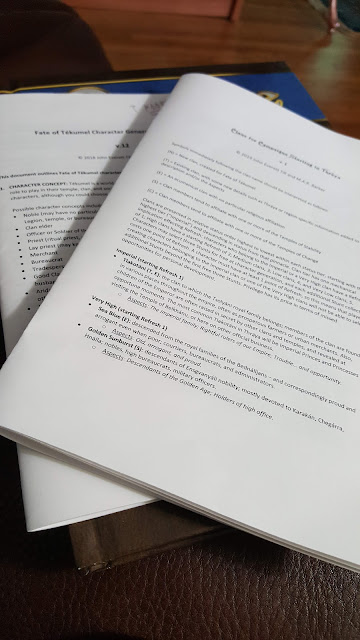 One of the challenging aspects of character generation at the game table, is having a list of clans that is easy to visually scan and from which players can select a clan that "feels right" for their character concept and that does interesting things. The Sourcebook has the definitive list of best-known clans on Tékumel, but the Professor was also clear in the text that there are many other local clans. We know that players at the Professor's table also worked with him to create new clans, such as Ensorcelled Goblet, a Drá-focused clan. The challenge is how to carry on that tradition in a way that is respectful of the source material and continues to build the world in ways that are respectful, natural, and interesting to players.

It has been a busy few weeks for the Fate of Tékumel RPG, as I have been developing a new document, "Clans for Campaigns Starting in Thráya". The focus of the document is a resource to help players choose clans at character generation. My focus is on clans that are based-in or have a presence in the city of Thráya and its immediate surrounds, since Thráya the area of the Empire that I am developing for the RPG.

The list includes traditional, canonical clans as well as some new local and regional clans. The clan list is currently at 4,500 words (about 10 pages), but will grow a bit as I add a few more clans.

Oh, and every clan has Aspects now.
Posted by Tallgeese at 10:43 AM